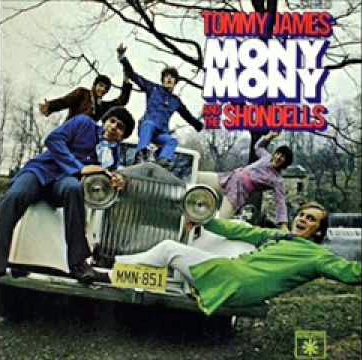 Tommy James’ “Mony Mony” is one of those great little rock songs from the 60s that has aged very well. Thanks to a cover from Billy Idol in the 1980s, the song was reintroduced to a whole new generation of listeners. But what, exactly, is the song about?
Not much, as it turns out. Tommy James says he and songwriting partner, Ritchie Cordell, were just trying to come with a frat/party rock song in the vein of “California Sun”  or “Money (That’s What I Want)”… something that cut against the grain of all the “serious” rock that was then dominating the music scene.

So, who the heck is “Mony?”
Ah, there is the real story. James and Cordell had most of the song together. They had even created the music tracks in the studio. But they were stuck on a girl’s name. They wanted it to be unusual (like “Sloopy”) and it had to be two syllables to fit the track they had already created.

The pair were sitting in James’ apartment in New York City trying to complete the song. As James tells it: “…finally we get disgusted, we throw our guitars down, we go out on the terrace, we light up a cigarette, and we look up into the sky. And the first thing our eyes fall on is the Mutual of New York Insurance Company. M-O-N-Y. True story.”

And for the first and probably last time in rock history, an insurance company inspired a classic song!