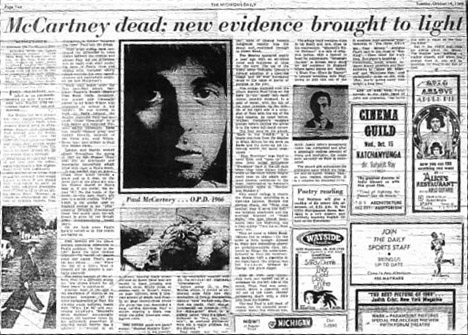 1969: A bored writer for a college newspaper unintentionally starts one of the biggest rock hoaxes of all time.

Fred LaBour is asked to write a review of the new Beatles album Abbey Road for the University of Michigan student newspaper. Instead he turns in a piece he clearly thinks no will take seriously, headlined “McCartney Dead: New Evidence Brought to Light.”

The “Paul Is Dead” furor grows so great, Life magazine actually runs a cover story a few weeks later featuring photos of Paul McCartney, very much alive at his farm in the UK.