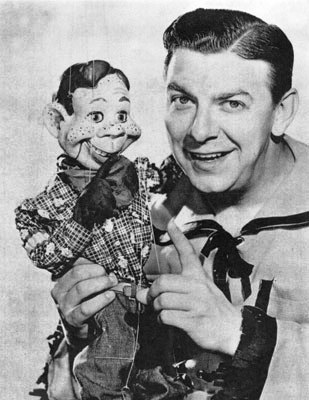 When Baby Boomers reminisce about Howdy Doody, the talk usually focuses on the puppets. But most of the actual air time on the show was actually devoted to Buffalo Bob and a band of real live characters who shared the stage with the puppets, including Clarabell the clown, Chief Thunderthud, and J. Cornelius Cobb who ran the local general store.

Additionally, Dayton Allen, the voice of Mr. Bluster and Flub-a-Dub, also appeared as a variety of live characters whenever the script demanded it. In the early days, Allen portrayed the wrestler Ugly Sam, Pierre the Chef, cowboy Lanky Lou and explorer Sir Archibald, among others. 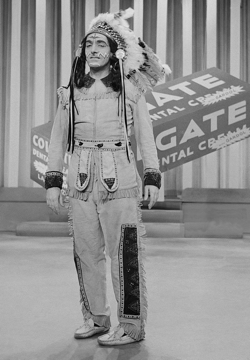 Chief Thunderthud was chief of the Ooragnak tribe (spell it backwards). Actor Bill Lecornec made a lasting contribution to pop culture when he voiced Thunderthud’s trademark greeting, “Cowabunga!” The phrase was soon adopted by California surfers, who in turn influenced the creators of the Teenage Mutant Ninja Turtles. Thanks to the Turtles, the phrase remains current today, although few under the age of 60 realize its true origins. (BTW - Bill was also seen on the show as Oil Well Willie and Doctor Singsong.)

But, next to Buffalo Bob, the biggest of the human stars was undoubtedly Clarabell. He never spoke, instead honking one of two horns attached to a box on his waist. One horn was labeled “Yes” and the other “No.” His whole purpose in life seemed to be to squirt seltzer in Buffalo Bob’s face, to the delighted squeals of the Peanut Gallery. (Today, we’d wonder if he had OCD.) 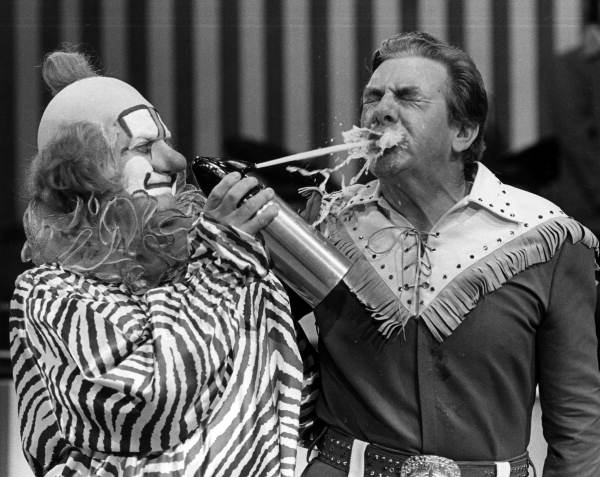 Clarabell was initially portrayed by a young Bob Keeshan. As the show’s popularity skyrocketed, Keeshan received a nice raise, but wanted still more money. NBC disagreed and replaced him with a jazz musician named Lew Anderson, who stayed with the show through the rest of its run. Don’t feel badly for Keeshan. CBS hired him, installed him in the Treasure House and as Captain Kangaroo, his television career lasted far longer than Howdy’s.

Joining Keeshan in his demand for higher salary were puppeteer Rhoda Mann (who operated Howdy), Dayton Allen, and Bill Lecornec. They all retained the same agent and made a united “take it or leave it” demand. Bob Smith and the show’s other producers decided to leave it.

But not before calling the show’s entire cast and crew together on December 23, 1953. Bob Smith told everyone exactly what kind of raise the four had asked for, asked them to correct him if he was wrong (they didn’t), and then announced that the show was accepting their resignations immediately. Word spread quickly through the New York broadcasting community about what came to be known as “The Christmas Eve Massacre.”

While the show was able to find replacements for Keeshan, Mann, and Allen, they simply couldn’t find anyone suitable to replace Lecornec. Not only was he unmistakably Chief Thunderthud, he also provided the distinctive voice of Dilly Dally, Howdy’s best bud. So after a few weeks, Buffalo Bob called up Lecornec, mended fences and brought him back to Doodyville (complete with a nice raise). Lecornec stayed with Howdy Doody for the rest of its run, also serving as the show’s general announcer. 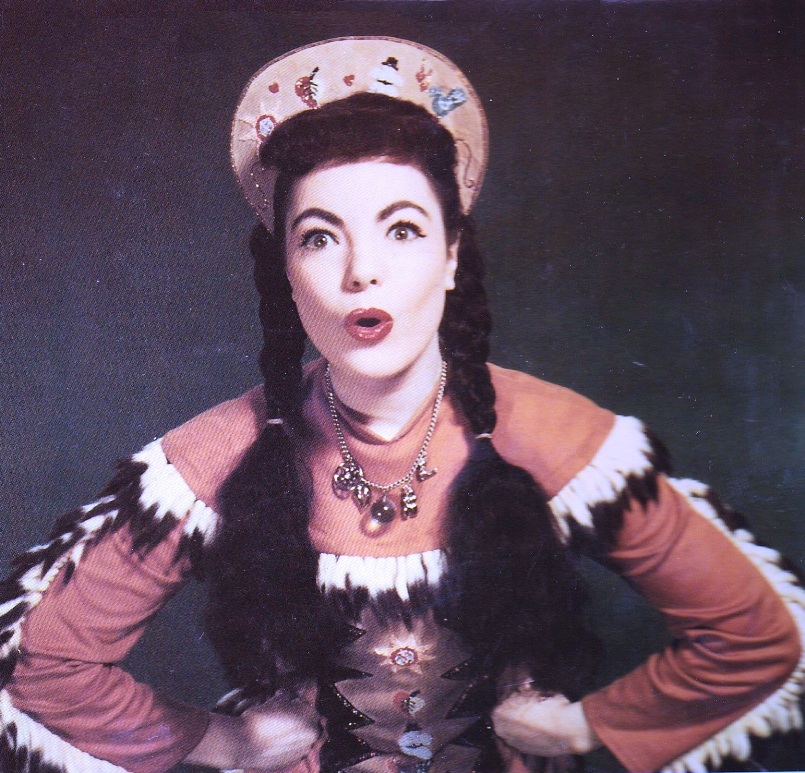 Far and away, the most beloved of the live characters was Princess Summerfall Winterspring, portrayed by the beautiful Judy Tyler. Judy went on to co-star with Elvis Presley in Jailhouse Rock. It looked like she had a great career ahead of her. Sadly, Judy and her husband died in a car accident in 1957 while returning to New York following the completion of the Elvis film.

The show wasn’t destined to last much longer. As television audiences and production values grew increasingly more sophisticated, Howdy Doody was starting to look a little dated. Having had a good long run (nearly 13 years, much of it 5-days-a-week), Howdy was nearing retirement. The final telecast was on September 24, 1960 and NBC gave the cast and crew an entire hour to say goodbye.

Of course, most of us remember the special surprise they had for us on that last show, when Clarabell admitted that he really could talk! As time ran out, the camera dollied in for a close-up on Clarabell. With a tear streaming down his cheek, he spoke for the first and last time as he said, “Goodbye kids!”

But it wasn’t really the end for Buffalo Bob, Clarabell or Howdy. We’ll have more on that in our next installment.