The Story Behind the Song: "Darling Be Home Soon" 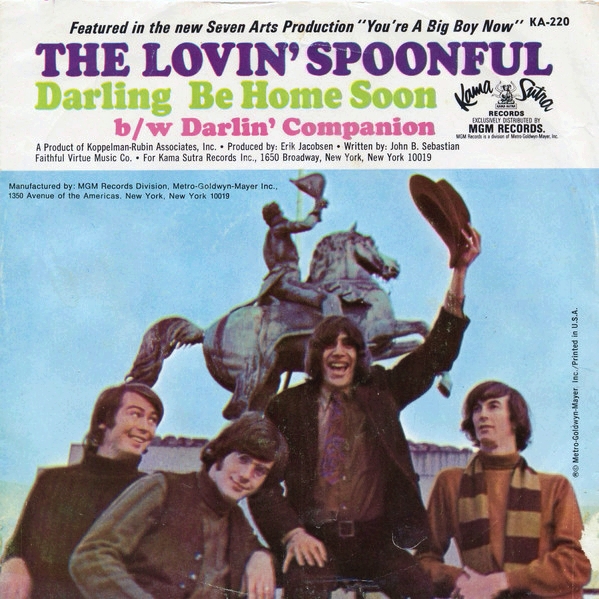 While not as big a hit as some of their other releases, “Darling Be Home Soon” by the Lovin’ Spoonful has increased in stature over the years, with cover versions being recorded by Joe Cocker, Bobby Darin, the Association and even Slade and the Tedeschi Trucks Band.

The song was commissioned by then-beginning film director, Francis Ford Coppola for his coming-of-age comedy You’re a Big Boy Now. Coppola wanted the song for the film’s pivotal seduction scene. He had been using “Monday Monday” by the Mamas and Papas as a placeholder & told songwriter (and the Spoonful’s leader & songwriter) John Sebastian that he wanted the Spoonful’s song to be the same tempo.

Sebastian had been thinking about how many rock songs were written about guys on the road hoping to get back to their girl. He decided it was time to reverse that dynamic. He wrote about a guy who was waiting for his girl to return from the road. He deliberately kept the lyrics vague. We’re not sure if the guy is singing to his girl just before she leaves or he’s singing it after she’s already gone to cope with his loneliness.

No matter which interpretation you want to give it, his band did not like the song. They didn’t think it rocked enough and was “too emotional.” Most of their earlier hits had all been up-tempo pop tunes with much more playful lyrics. In addition, it became the first Spoonful song to receive a full orchestral backing which took the group’s sound farther away from their usual folk-rockabilly leanings.

To this point, the band had successfully bucked the prevailing trend in rock recording, which was to use studio musicians instead of actual band members during the recording process. But the rhythm track on “Darling Be Home Soon” proved especially tricky and in the end, the Spoonful’s drummer, Joe Butler, was replaced by studio player, Billy LaVorgna.

Unfortunately, You’re a Big Boy Now bombed at the box office, which hurt the songs chances on the charts. It broke into the Top 20, but stalled at 15. Nevertheless, it went on to become a favorite of Sebastian’s and one that he nearly always plays during his live shows.