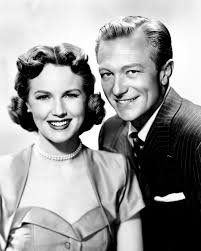 This very tongue-in-cheek detective series had its roots all the way back in the 1930’s when Richard Lockridge created the duo for a series of short stories in the New York Sun. When those proved popular, he teamed with his wife Frances to produce a Mr. & Mrs. North novel (1936). That touched off an entire series, 26 books in all, that continued until Francis passed away in 1963.

In 1941, Mr. & Mrs. North made their Broadway debut in a whodunit that ran for 163 performances at the Belasco Theater in the spring of 1941. The play then went out to Hollywood where it became a rare starring vehicle for Gracie Allen (without her husband and partner George Burns).

The radio version of Mr. & Mrs. North started in 1942 with Alice Frost and Joseph Curtin in the leads. The show proved very popular (lasting all the way until 1955) and when television came along, it was only natural that a television version would be launched. 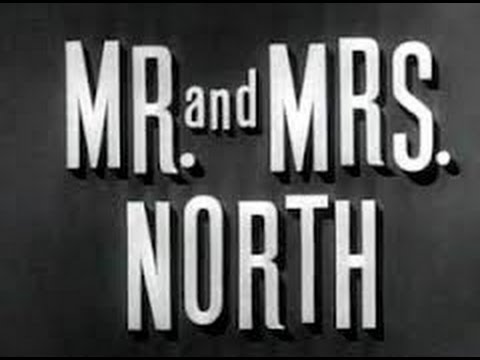 Barbara Britton and Richard Denning were cast as Pam and Jerry North. Each week, someone would drop dead in their vicinity and Pam would somehow manage to find the killer before 30 minutes were up.

Despite the gruesome nature of some of these homicides, the tone of the show was surprisingly light-hearted with Pam often portrayed as the kind of “wacky wife” that Lucille Ball was making popular.

The show spent the 1953 TV season on CBS. Ratings were so-so. For 1954, the show moved to NBC, where ratings declined even further. In all, 58 black & white episodes were produced. It was enough to keep reruns in syndication in the early days of TV when local stations were desperate for programming to fill the non-network hours.

As the show long ago slipped into public domain (meaning anyone can sell copies of it), 53 of the 58 episodes are available in one DVD package or another.

The influence of Mr. & Mrs. North can also been seen in such latter-day husband and wife mysteries like Hart to Hart and McMillan and Wife.