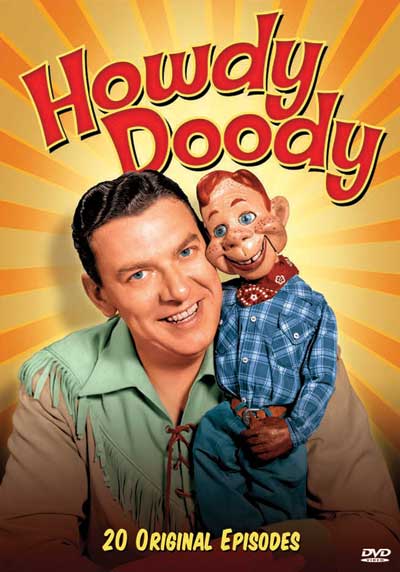 When Howdy Doody left NBC in 1960, the show simply vanished. Unlike Adventures of Superman, The Lone Ranger and other early kid-vid, the show never went into syndication. Perhaps that was due to the fact that most of the show’s early days existed only as kinescopes.

Kinescope was the way networks preserved copies of their live shows. The name sounds way more high-tech than it actually was. A kinescope was simply a camera hooked to a recording device and pointed at a monitor. That’s it. It recorded the show as it was broadcast live. Kinescoped shows look rough, even back in the day. Remember that early TV screens were slightly rounded, so the kinescopes looked a little distorted and fuzzy.

So Buffalo Bob retired to New Rochelle and bought a liquor store. (We don’t know how we would have reacted had we ever found ourselves in later life purchasing a bottle of whiskey from Buffalo Bob.) He also wound up purchasing a radio station, WQDY, in Calais, Maine. Howdy sat in a glass case in Bob’s home office.

As the 60’s went on, Bob sold the New York liquor store, kept the radio station and became a “snow-bird,” spending six months in Florida and six months in Maine. 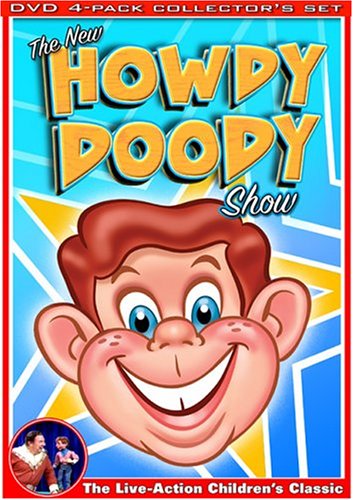 Then one day in 1970, he received an invitation from the University of Pennsylvania. Would he be interested in coming to the campus and staging a live Howdy Doody Show? Bob was a little unsure and so, demanded a fee he thought the school would never pay: $1,000. The school’s event organizer assured Bob that would be no problem. The Howdy Doody Revival was about to get underway.

The event was a stunning, wall-to-wall sell-out. Students had to be turned away. Those who did get in, laughed, applauded wildly and sang along as Buffalo Bob ran through many of the numbers that had been used on the show over the years. (Who can forget that timeless classic “Cross the Street with Your Eyes”?) Other schools took note. For the next several years, Bob and Howdy appeared at over 500 colleges all across the United States and even played the Carnegie Hall of rock venues – New York’s Fillmore East – in 1972. 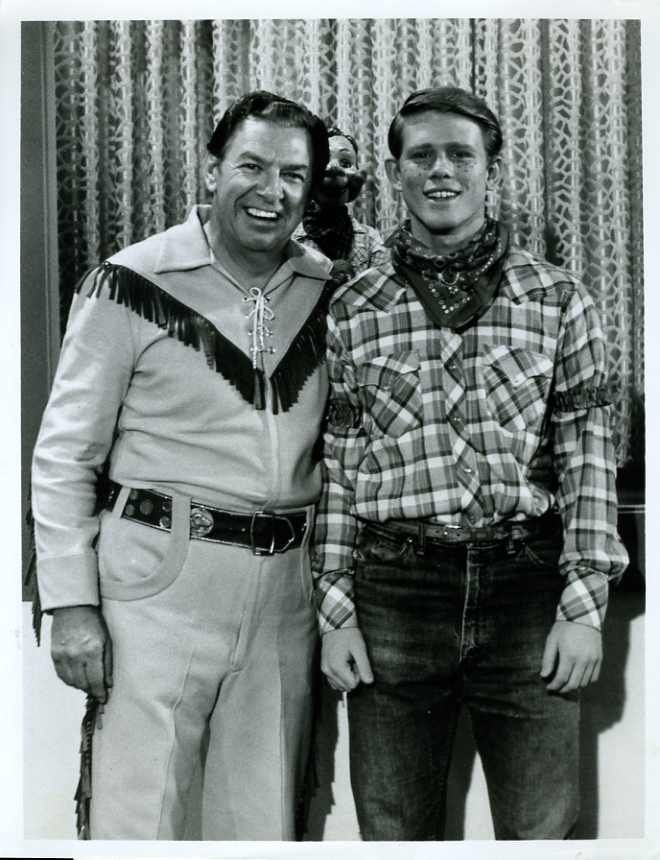 Bob’s shows were generating decent publicity and there was growing demand for new Howdy Doody merchandise.RCA released an album of songs and banter from Bob’s live shows, called (what else?) “It’s Howdy Doody Time!” The craze for 1950’s nostalgia ignited by the release of George Lucas’ American Graffiti spawned the long-running sit-com Happy Days. During its very first season, Buffalo Bob and Howdy Doody showed up in an episode broadcast on February 18, 1975. Richie and little sister Joanie are guests on the set of The Howdy Doody Show, where Ron Howard’s resemblance to the famous puppet was duly noted.

Ultimately, a backer appeared for a new updated Howdy Doody series. The show was produced in Florida in 1976 with most of the original cast returning to their iconic roles. The New Howdy Doody Show was successfully syndicated in all of the country’s major markets. Unfortunately, kids now used to Sesame Street and the Muppets did not warm up to Howdy the way the Baby Boomers had. The show was cancelled after only half a season. 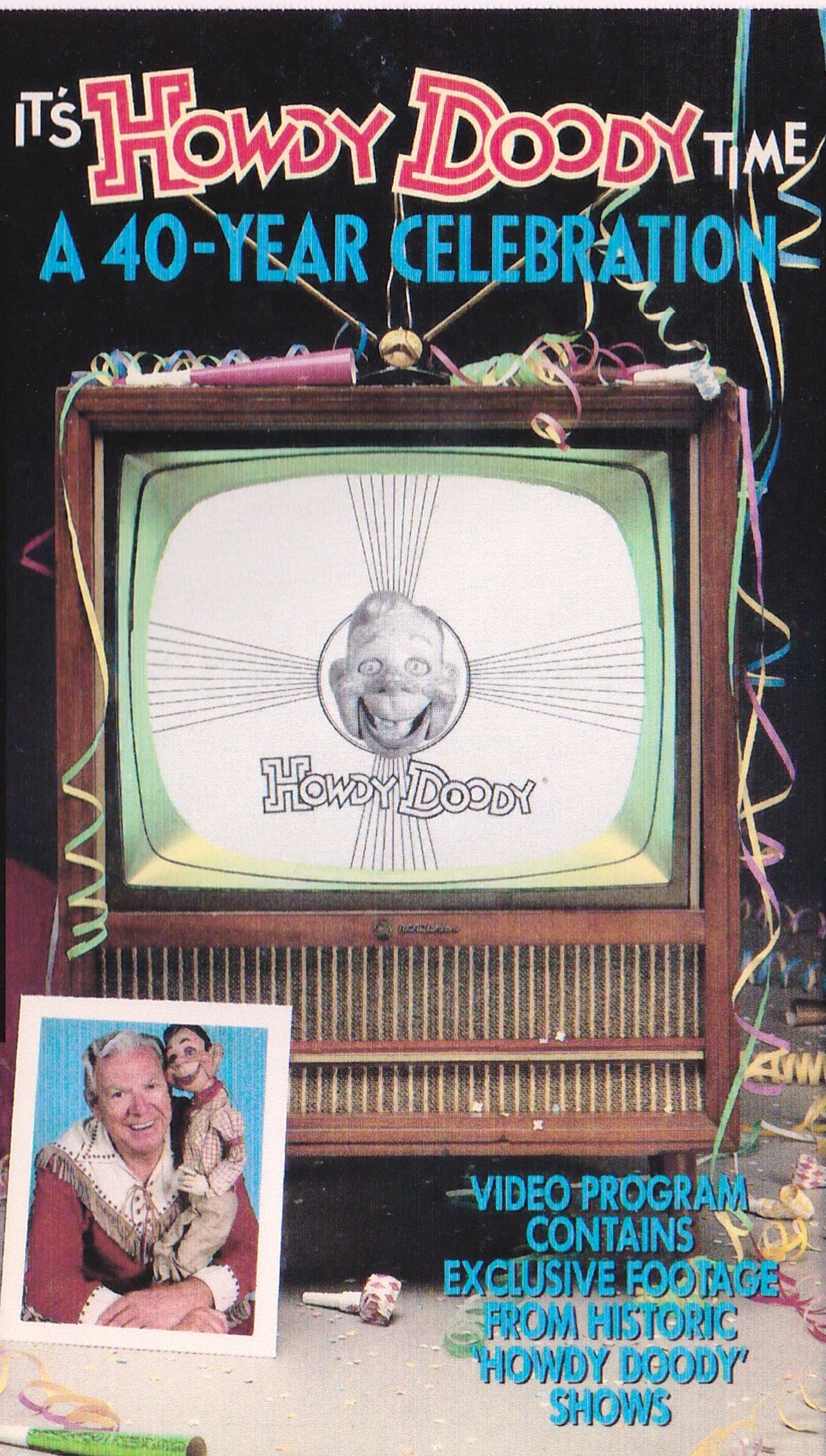 But Howdy did get one final hurrah. In 1987, a two-hour television special titled It's Howdy Doody Time: A 40-Year Celebration was syndicated in every major market in the U.S. Buffalo Bob was joined by Lew Anderson (Clarabell), Bill Lecornec (Chief Thunderthud), Nick Nicholson (Cornelius Cobb) and a full complement of the puppets who brought so much happiness to Baby Boomers’ childhoods. In addition, the show featured guest stars such as Milton Berle, Johnny Carson, John Ritter, Jerry Mathers and Tony Dow.

After that, Bob and Howdy returned to retirement, making occasional personal appearances. Of course, during the show’s run, there was actually more than one Howdy Doody puppet. The back-up puppet (“Double Doody”) today resides in the Smithsonian Institute in Washington, D.C. A stringless model of Howdy used in publicity photos and sometimes used when Bob was touring (“Photo Doody”) is in the hands of a private collector. The original Howdy remained in Bob’s possession until he passed away in 1998. Then, a wild custody battle broke out. The winner was the Detroit Institute of Arts, who had been named in Bob Smith’s will as the place he wanted the puppet to go. 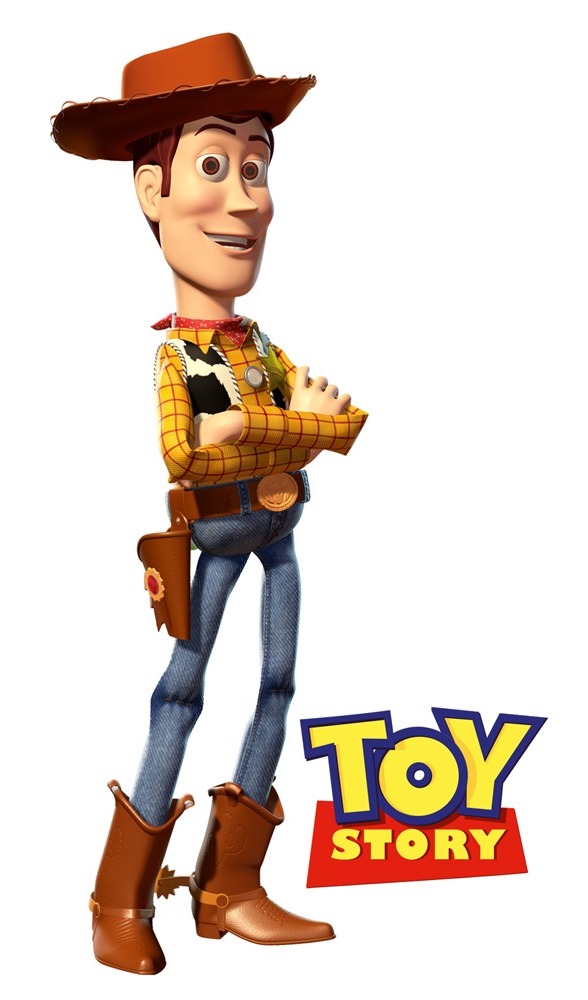 But you can still see echoes of Howdy in pop culture. In fact, most of the kids raised on Disney-Pixar’s Toy Story movies would be surprised to find out that the lead character of Woody (voiced by Tom Hanks) was undoubtedly patterned after Howdy.

If these trips back to Doodyville have got you anxious to learn more or even re-watch some of those classic episodes, we’ll tell you where you satisfy that itch next time.