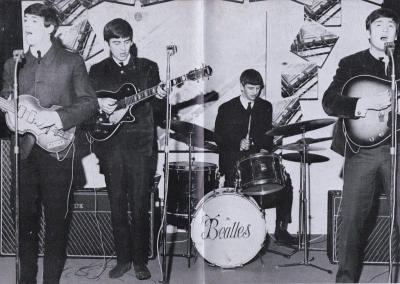 We are currently involved in a project, trying to commit to digital files the entire run of the Beatles official British fan magazine, Beatle Book Monthly. This magazine was never distributed in America, so most of these pictures and articles have never been seen in the States. The magazine ran from August, 1963 (6 months before Beatlemania broke out in the States) until the band's break-up in 1970.

Take a look at the center spread from the magazine's very first issue. Notice anything different about Ringo's bass drum?

BTW - If you'd be interested in obtaining a copy of these magazines once we have finished converting them to digital copies, contact us!